Attack of the Stan's Monster!!!

I might be one of the few people who has managed to get a flat while riding indoors, and while using a trainer tire! I have been running the trainer tire on the Cervel since mid December and I really like how it works. I have not had any issues and my regular tires are not getting demolished by the trainer. But that wasn't the case today. A few times during previous workouts, I'd felt a thump-thump as the wheel was spinning, like I was rolling over something. Nothing came of it, so I ignored the feeling. Now I know - that thumping was the Stan's monster growing.

Got on the trainer today at CTS for an always fun workout. I started out with the warm up, did some high cadance intervals to loosen up my legs, then settled into the workout proper. After suffering for nearly an hour (although 260 watts is feeling easier), I started my cool down. Normally, I would head outside on such a nice day, but because of work, I opted to save time and stay inside. Well, less then 10 minutes after I had started the cool down, the rear wheel started feeling a little odd. There was a clunking, like I was hitting a bump with every revolution. Then the wheel started slipping. 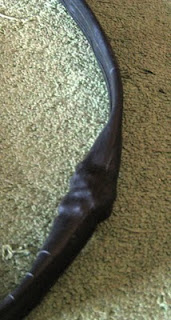 So I hopped off and checked the tire. Flat! And it would not take any air at all. We tried three times, but nothing. Luckily, I had a spare tube with me. We quickly got the bike off the trainer and took the rear wheel off. Pulling out the old tube, Danelle and I inspected it - and there was the Stans Monster. A hairball sized chunk of gunk that was completely blocking the whole tube. No saving that poor thing - but at least I now have tube to use to make tire boots! I think I had a few small punctures and that it finally hit the last straw. At least it happened inside, during training and not during a long ride or race!
- March 30, 2010
Email ThisBlogThis!Share to TwitterShare to FacebookShare to Pinterest