Bike Packing or a great way to explore new trails

So last year Nick did the Colorado Trail Race with one of his friends. All the way from Denver to Durango (minus the wilderness areas) - unsupported, carrying everything. Since that trip, Nick's been very interested in doing a few more bike-packing excursions. He's been getting the gear we need all winter, from the backpacks, to lightweight sleeping bags, lightweight thermarests, a bar bag and seat bag for him, and rain gear. The only thing we've been missing has been a weekend to actually get up into the mountains and go for a ride! So even though I was feeling a little beat up from the South East Championships, we decided to take advantage of the nice weather last weekend and try it out. The orignial plan was to ride the Ring the Peak trail, but we decided to just ride up Gold Camp road and see where we would end up come darkness, camp then ride home the next day


Riding through Stratton and up Gold Camp, we were the star attractions. I don't think anyone had ever seen a bike loaded down, or cyclists with such large backpacks. Even the backpackers, with packs twice as large as ours were staring as we rode past. Just smile and nod and keep on going. The first thing I noticed was that the darn pack was heavy (15lbs feels like a lot more when you're riding a bike) and that my balance on the bike was a little off. But we were making decent time up Gold Camp, enjoying the solitude of the road. Nick wanted to take the abandoned rail grade around to Old Stage Road, so we scrambled through the collapsed tunnel. According to his map, the grade should have been an easy pedal, with one more collapsed tunnel. Well, maps don't tell the whole story and we ended up bushwacking around that tunnel. But soon we were back on the road and heading up hill. We passed the Frosty's Park turnoff and kept going. Finally, we reached the road Nick wanted - 370c - and turned down the rocky jeep road. It was shown on the map as a 4wd, undeveloped road. We rode about another 20 minutes, then found a sweet place to camp. 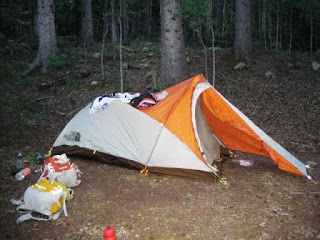 Nick set up the tent and we built a small fire ring, thinking that with all the trees and leaves and such, a fire would start pretty easily. Nope! It was a lot wetter then we'd anticipated and it took us a few times to actually get a fire going. I had a small one at first, but didn't build it on something I could transfer into the ring, so we had to start over. Watching a few episodes of SurvivorMan to refresh the skills would have been useful! But we got a nice fire started and soon were heating water to cook our dinner with. Yea, REI dehydrated meals! Thoses things are tasty and pack a potent dose of calories, especially if you eat the full two servings! After eating and staring at the stars for a while, we settled down for the night. Both Nick and I were a little worried about bears, so Nick built a "wall" around the tent and we pulled all the food and such out of the packs and secured it by the bikes. At least that way, if a bear did come sniffing around, it wouldn't go for the tent!
After packing up everything and grabbing a small bite for breakfast, we hit the road. It was nice and rideable for a while, but then things started going downhill. We quickly found out why the Jeeps we'd seen on the road were all decked out, lifted up, huge tires and winch equiped. The road was filled with boulders and tilted straight up for a while. Yeah, not riding up that! So we pushed the bikes up the hill, knowing that the map showed we would find either trails or ridable road soon. That stretch of hikeabike took forever! But we did top out. There was a trail that we tried riding, but it soon vanished into the woods. Back to the road. We cruised down to the Jone's Downhill parking area and stopped for lunch. Another dehydrated meal, cold this time. And it still tasted good.

We decided to take Pipeline down - Nick had never been on that trail and hey, we were exploring! It was a fun trail, but really loose in spots with a lot of scree. I was having a few issues with the balance and trying to get back far enought because of the backpack, but doing okay. Only ran off the trail once, but it happened to be into a bush and a rock! We merged with Jones, then detoured up and over Buckhorn and Capt Jacks. From there, it was an easy ride to home.


For the first time I'd ever been bikepacking, I think it went well. I definatly want a seat bag so I can get some of the weight off my back (or have more room for food - paranoid about going hungry) I also was having problems with the water bottles on the single track. There was not room in my pack for the bladder, so I had three waterbottles - two in the pack, one on the bike. We would stop at the creeks, purify the water, and keep going. It worked great on the road, but I am not that good about drinking when the bottle is on the bike and I want both hands on the bars. I was a little dehydrated at the end. I also think that it will be better if it's not a long uphill slog one day, then solid down hill then next day. That was hard on my butt and hands! Now we just need another weekend to head off into the hills again!
- June 24, 2010
Email ThisBlogThis!Share to TwitterShare to FacebookShare to Pinterest
Labels: Camping, Mountain biking