Playing in the snow - WS1

After the debacle that was the Rescue Run, I was honesty a little worried about the first race in the Winter Series. I knew the course would be challenging, with patches of black ice in spots. I knew the hills - both up and down - would be stressful for my hamstring. I didn't know how bad thought - I'd done a few super short, super slow runs over the week and I could feel my hamstring on every stride. In short, I had no expectations at all and was feeling rather concerned about having decided to do the long series.
And then the snow came. Friday we got nearly five inches in the Canyon and instead of being smart, Nick and I went and played on the Fatties. Fun sometimes overwhelms smarts... And with the snow, the entire race picture changed for Saturday. The races wasn't going to be fast at all. It would be decided on who's was the smartest and most prepared for playing in the fresh snow. I wasn't so worried about my hamstring and was looking forward to the challenges that awaited. 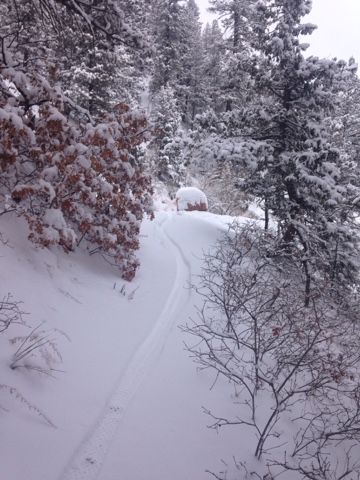 First thing I noticed when we got the CMSP was the footware of most racers. It seemed trail shoes and Kahtoola or Yaktraxs were the first choice. A few brave souls were opting to go with acre shoes, hoping the trail would be packed down enough for those to be sufficient. Me? I completely bucked the trend. Sure, I was sporting my brand new, super sharp Kahtoolas, but not on trail shoes. I figured if I was going to race with the weight of the Kahtoolas, I was going to wear my lightest a shoes possible. After all, the spikes would be the primary traction - not my shoes. I was given some odd locks, but no matter! Some of the races are all in the name of having fun and trying new things!
Gun went off and I started a little harder then I really wanted. I knew the trail was narrow to start with and that the packed in line would be very narrow. So I figured - maybe a little rudely - it would be easier for me to step aside and let people pass then for me to surge and get around. Found myself in third, feeling pretty good. The hamstring was there, so I slowed up a little. I dropped down into fifth as we turned  onto the Talon climb. But that was okay. I was having fun, enjoying the challenge of the conditions and the terrain. I ended up power hiking most of the Talon climb. I was going almost as fast hiking as the runners around me. I was hopeful that once I hit the downhill the sharp spikes of my Kahtoolas would give me an advantage. As long as my hamstring cooperated... We hit the back loop of Talon and I found my footing on the rolling hills. Yay! Freedom to fly - at least to float a little. The descent had me giggling - a combination of sliding in the snow and ice and barreling down the steep hills. I had the sixth place woman in my sights and the competitive drive welled up. I could catch her. This is a series after all and if I could limit my loses in the first race, I might have a chance for a good showing. As we merged into the short course runners, I made the catch and did my best to loose myself in the crowds. My hamstring was twinging a little, but I could keep the pace up. 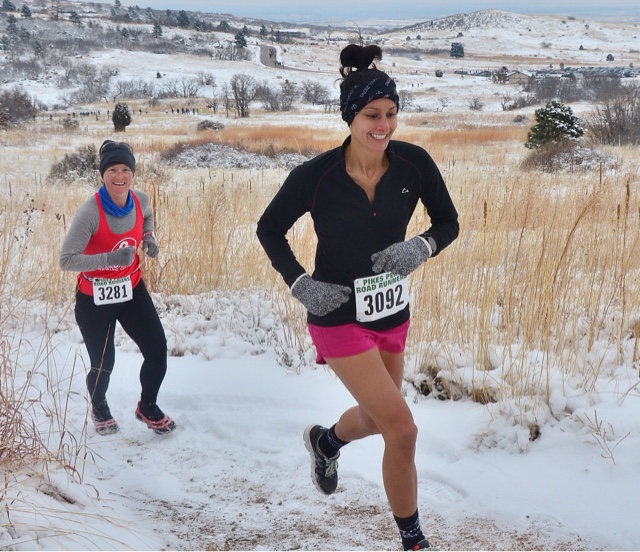 As the finish approached, I could see two more women in the distance. I would catch them, I'd run out of trail. But I had succeeded in keeping them close. Close enough that if I can tame that hamstring, I may have a chance. We shall see. I have to behave, even if that means running smart and not fast.
- January 19, 2016
Email ThisBlogThis!Share to TwitterShare to FacebookShare to Pinterest
Labels: race report, running