Jamming at the pass

Race number two of the Leadville Winter Bike Series was at the Tennessee Pass Nordic Center just outside Ski Cooper. The course was held on the Nordic trails and snowshoe paths - but all the non locals had for reference was a course map. I knew there would be lots of climbing after looking at the map - we dropped from the base area all the way down into the Fish Flats area of the Nordic trails and then back up. I didn't know how much climbing there would be besides the obvious...

Of course, we tried packing as much as we could into one short weekend. Why not play in the snow for a bit before our race? We brought our skins and skis, as well as all our back country gear. Ski Cooper has a generous uphill policy, so it was time to practice. We got to the ski area, got all geared up (easier said then done, even with the van) and headed up. Literally up the ski slope! As requested, we stuck to the edge of the slope, in the shade of the trees. Keeping up a steady, but comfortable pace, we trucked to the top of the hill. It took us about 45 minutes to reach the bathroom building at the summit. Not bad for just a trial run of our gear. However, when we got to the summit, getting organized to ski down was a little more complicated. That took way too long - we need to practice that step a lot more!

I was feeling better heading into this race and really wanted to make the hour pedaling harder and fast. We spent the couple of hours between our skiing and the race just chilling, reading and people watching in the lodge. Then the skiers started vacating and the fat bikes started arriving in the parking lot. That was the signal! We went to get our numbers and started getting ready to race. It wasn't as cold as the first race, but still cold enough. I was wishing I'd been smart enough to make up some hot Apples and Cinnamon Skratch for my hydration. Keeping the tiny hydration pack under my coat works, but the cord still gets frozen - and the nice, warm liquid encourages me to drink more. Oh well. With numbers and lights on our bikes, it was time for a short warm up. One issue from Copper was the tire pressure - both Nick and I had been running too much air pressure for that race and I didn't want to make the same mistake twice. So after a short loop, I lowered my air pressure and rode a little more. Better. Could have been a little lower, but didn't want to go too low on a course we didn't know. 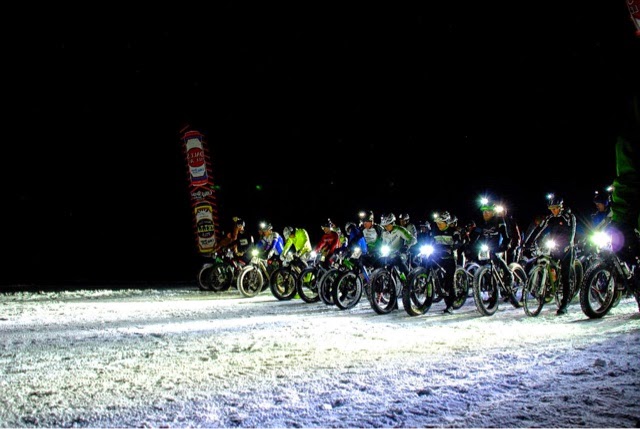 I had three main goals for this race. One - stay upright at the start. It was a much wider start then at Copper, but also a downhill start. I was worried about that down hill and getting run over as everyone careened into the first tight corner. With the ten second count down underway, I turned my attention to the narrowing course. On go, we all started rolling downhill, faster and faster. Goal one success! Around the first corner and I was still upright and pedaling hard. I was in second place, but with a few women right around. I'd make a catch, then loose some ground. Back and forth for the first few miles, until the eventual winner motored past and vanished. Second place was just ahead and I was right with third.
My second goal was to keep the bike upright. I'd done more crashing at Copper then at almost any race in years. Had a few close calls in the opening miles of the race as my tires slid in loose snow, but managed to keep it upright. Ease off the pedaling a little and focus. My hesitancy when the bike started slipping slowed me just a little - enough to lose contact with second place. And the we got the first section of singletrack. I was one rider behind third, but wasn't going to try to pass in the narrow groomed section. I could see where people had face planted into the banks getting off the groomed track. And we weren't going super fast as a group - there was a guy on a regular bike leading the train. Until we got the singletrack climb. Then he pulled over and let us all by - but I was still one rider behind her and not getting around on the single track. Oh well. I calmed myself by saying that as long as I could keep her in sight, I'd be fine. Besides, the pace was comfortable and would save energy for the back half of the race. Little consolation when at the top of the hill, the third place woman vanished. She hit the descent and was gone. Me? I was taking it slower, babying the corners since I had no clue where I was going!

My third goal was to actually make it a race this time. At Copper, after the third of many crashes, I kinda gave up and just pedaled around the course, having fun. Well, I didn't want to do that again. I wanted to race and race hard. And that meant when the third place woman vanished down the hill, I had some serious chasing to do! The course soon opened up into the Fish Flat area and I hit the gas. Time to start pedaling. I reeled in all the guys who'd caught me on the descent and motored around. I had no clue where she was, but I knew she was there some where. Down in the Fish Flats, it was easy to get distracted with the starts and the brilliance of the lights reflecting off the snow. Had to keep my eyes in my own lights thought, the brightness of the Exposure Lights turning the snow into daylight. With each guy I caught, I got closer without realizing it. And then I saw the yellow barmitts. Eased up for a few seconds to catch my breath and made the pass, hoping to make it stick. I got some ground, but not enough and I didn't want to look around to see where she was. At the start of the long, long climb up from the valley, she caught me back. I was able to keep her in sight until a short little descent and she was gone.

For a movement, I resigned myself to fourth place and thought about easing up. But I didn't. I kept pedaling hard, working to keep the traction under my fat tires. Another long, long climb back up to the Cookhouse. Still no sight of her, but I knew she couldn't be that far in front of me. Then we hit the last section of singletrack. Narrow groomed trail, just wide enough for one bike. Think Endor during the winter time... I could see where other racers had slipped off the trail and nose dived into the deep snow. Yikes! But it was so much fun, I couldn't help but laughing. Not even giggling, laughing as I wrestled the bike through the narrow gaps between the trees. And all of a sudden, the third place woman was right there in front of me, pulling her bike out of the snow. I slowed to see if she was okay, then bolted. Always prefer to pass someone based on skill or ability, not accident but I wasn't going to let it slide. It also meant that I really needed to focus on staying upright and not adding to divots alongside the trail. Took a few chances and slide a couple of times, but kept the rubber side down. Once the trail opened back up on the Nordic track, I sprinted away. Had no clue what the gap was but I wanted it to stick the time!

The Tennessee Pass Night Jam was really a fun race. From the challenge of the course to the yummy dinner after the race, it was truely designed to bring people together, to ride bikes hard and fast and then hang out afterwards. Well organized, lots of cool raffle prizes and great time for everyone.
- February 08, 2015
Email ThisBlogThis!Share to TwitterShare to FacebookShare to Pinterest
Labels: Exposure Lights, fat bike, night riding, race report